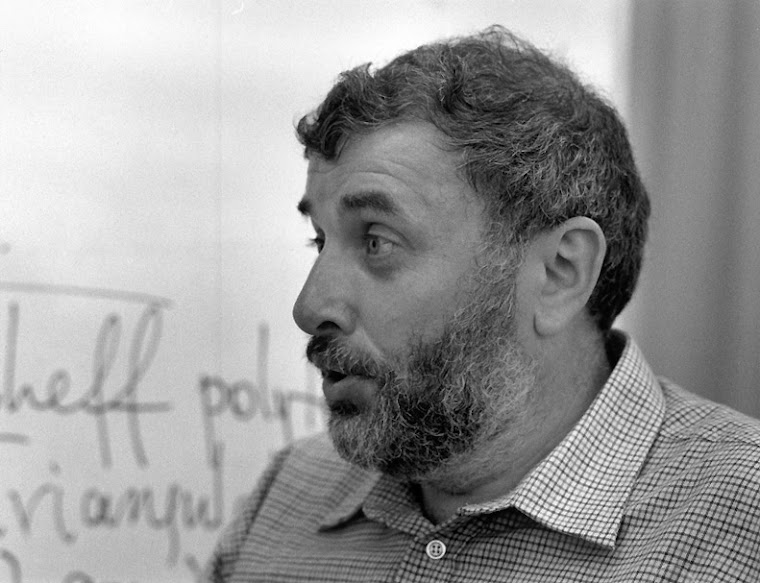 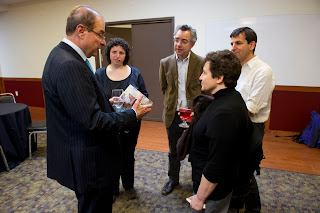 On April 18th 2013, at the university’s Aca­d­emic Honors Con­vo­ca­tion, Andrei was posthumously awarded the highest honor Northeastern can bestow upon a faculty member.

The photo (courtesy of Brooks Canaday/Northeastern University) shows Galya and Katya as well as Andrei's colleagues Profs. Valerio Toledano Laredo and Jonathan Weitsman talking with the Northeastern Pres­i­dent Joseph E. Aoun.
Posted by nieuwe_zijde at 12:52 AM No comments: Links to this post

The conference "Algebra, Combinatorics and Representation Theory": in memory of Andrei Zelevinsky (1953-2013) will be held on the campus of Northeastern University in Boston on April 24-28th.

The talks of speakers who agree will be streamed live here. Please spread the word about the talks' availability.

Update: The videos of the talks are now available for download.
Posted by nieuwe_zijde at 6:19 AM 3 comments: Links to this post

Our heartfelt thanks to everyone who took part in filling Andrei's Wikipedia page with actual content!

Thank you, B.Y. and L.K. for your help and advice!

Thank you, Sergey Fomin, for collecting and organizing the information about Andrei's mathematical career!

And - first and foremost - thank you, Sasha Givental, for doing such an amazing job creating a real Andrei's page!
Posted by nieuwe_zijde at 12:13 AM No comments: Links to this post

In the Book of Samuel, there is an interesting conversation between King David and a very wise woman. King David had exiled his son and the woman had been sent by Joab, the king's general, to plead with him to forgive his son. In the course of the wise woman's plea, she refers to the brevity of life, saying, "Ki mot namut u'kha-mayim hanigarim artza asher lo yai-asfu," "We must all die, we are like water spilled on the ground, which cannot be gathered up." (2 Sam 14:14)

"Life," the wise woman says, "passes quickly; it is like water spilled upon the thirsty ground. It sinks into the earth and soon is no more." This metaphor for life is troubling. For if life is like water absorbed by the parched earth, does this mean that all we are and all we have done and stood for, is gone forever, absorbed by the sands of time?

I do not believe so. For implied in the words of the wise woman of Teko is a consoling truth. Even if our lives are like water absorbed by the parched earth, it does not necessarily follow that our lives are therefore futile. Is water spilled upon the ground lost? Is it not true that it is precisely this submerged water that makes life possible? It is the rain and the dew that falls on the ground and ceases to be that makes for life. Without it, we would perish.

And this is the way it is with the life of the spirit. Our fathers and the many generations who preceded them, poured out the water of their lives, their dreams, their ideals and their hopes, and they have been absorbed by the hungry earth of life.

What is true of each of us in our individual lives is even truer of a teacher, whose life reaches out into many lives and helps shape the spirits of several generations. The fresh sweet waters of knowledge that flow from her lips helps awaken the seeds of idealism, of goodness, of devotion to God and Israel and country in the hearts of children and adults alike.

Now, Andrei Zelevinsky’s years have come to an end. His life is like water spilled on the ground that cannot be gathered again. But, what he has watered with his life has grown and developed and continues as a force in the lives of those whom he has touched. "Utzror bitzror hahayim et nishmato." "May his soul be bound up in the bonds of life eternal and may his memory always be treasured as a blessing."

It was just a few short months ago when we gathered for your mother’s funeral, Galina. We come together again…you, your in-laws Vladen and Natalya, your children Leo and Katya, with broken hearts…yet, thankful for the gifts and sheer brilliance that Andrei brought to this world, his profession and his family whom he taught just as zealously with even greater love, devotion and concern.

I have only heard stories regarding the difficulties endured by Jews in the Soviet Union regarding education and professional advancement. He excelled at the Moscow “Second School,” graduate Moscow State University and was even more concerned about those who followed who suffered blatant discrimination, he and mathematics colleagues organized the Jewish People's University for mostly Jewish students denied similar educational opportunities. What an act of courage and defiance not only against state-sponsored anti-Semitism but also against totalitarianism.

Andrei reveled in the success of others and his students with the pride of a distinguished educator. It is as if he understood the Rabbinic aphorism “I learned much from my teachers, but most from my students” underscoring his selflessness and dedication, how he touched the minds and hearts to many people the world over. It really does denote what an exceptional person he was to so many.

Galina, Andrei was your partner. Dmitry, he was a very loving brother. Leo and Katya, he gave from his heart. Vladlen and Natalya, he was a devoted son. He was a compassionate grandfather who wanted his family’s future here. For many years, his life involved teaching, and being a teacher. I know how it can become your entire life.

Andrei Zelevinsky lived well and made a mark on too many lives to count. Indeed, his life was like water covering a field, giving life to so many whose lives he touched. May he now rest in peace as his memory will be a blessing in time to come. Amen.
Posted by nieuwe_zijde at 12:19 AM 1 comment: Links to this post

Andrei Zelevinsky was a Mathematics Professor at Northeastern University in Boston. Andrei was a truly distinguished mathematician.  Among many other things, he co-developed a new innovative concept (quite a rare event) that had a tremendous scientific effect and generated a lot of new research in many fields by a large group of followers.

Just recently, Andrei was named a Fellow of the American Mathematical Society. He was awarded the title of The University Distinguished Professor - one of the university’s highest honors - and the ceremony bestowing upon him this honor posthumously will take place on April 18, 2013. Later this month, a conference in honor of Andrei's 60th birthday will be held on the campus of his university.

In addition to his outstanding research, Andrei was a great teacher.  All his life he enjoyed teaching kids: his younger brother, then his children, and recently started teaching his grandchildren. It is a huge loss for them that they won't be able to get more of Andrei's lessons.  Not only a beloved professor at Northeastern, Andrei spent a lot of his free time giving lectures at the math circle for gifted high school kids.

Andrei was uniquely qualified to work with gifted students. To succeed in deeply anti-Semitic Russia of that time, a Jewish kid had to be exceptionally talented - and Andrei was all that and then some. His mathematical talent became apparent at an early age and Andrei's achievements speak for themselves. He was a top student at the famous Moscow "Second School" (the school for the brightest kids at the time), he became a participant and one of the winners of the International Math Olympiad (the toughest problem-solving contest among the school kids from all over the world), and then made it to the top ranks of his chosen profession.

Andrei was fortunate to be given much and he was always generous in giving back to people around him. When a group of courageous mathematicians decided to try to fight the state-sponsored anti-Semitism (Jewish kids were blatantly discriminated against and were (almost) never accepted at the top colleges, including Moscow University) and organize the "Jewish People's University" for (mostly) Jewish kids who were rejected by the official system, Andrei was among the first and most active lecturers. It must be pointed out that this activity was exceptionally dangerous: some of the people involved were arrested and served lengthy prison terms on trumped-up charges, and at least one person was believed to be killed by the KGB. Part 3 of this book contains several people's recollections of what it was like, including Andrei's.

Many of the students Andrei taught at this Independent University - and other places, including the high school attended by both his own children - became distinguished mathematicians in their own right, which is surely a mark of a great teacher.

Andrei was a great family man and a great friend to many people all over the world.  When people got the shocking news of his passing, many of the responses were virtually identical: "Andrei was one of the best persons I have ever met."

He will be (and already is) missed by very many.
Posted by nieuwe_zijde at 8:08 AM 2 comments: Links to this post

Please point us to things we have missed.
Пожалуйста, добавляйте пропущенные нами ссылки.
Posted by nieuwe_zijde at 8:42 AM 3 comments: Links to this post

Please leave your tributes to Andrel Zelevinsky ז"ל in the comments below. Feel free to use whatever language you are most comfortable with.

We apologize in advance, but from now on comments will be moderated. We will do our best to shorten the time gap between the posting of a comment and its actual publishing.

Posted by nieuwe_zijde at 12:28 AM 8 comments: Links to this post 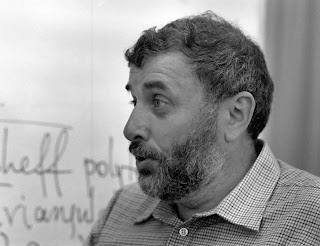 He loved to communicate with all of you via this blog and LiveJournal.

Words cannot express how much he will be missed.

Funeral services for Andrei will be held on Friday, April 12th at 11 AM EDT at the Stanetsky Memorial Chapel in Canton, MA. If you wish to attend the service, please plan on arriving by 10:30 AM.

After the service there will be a gathering of family and friends to celebrate Andrei's life. Please email andrei(at)neu(dot)edu for details.